Hello! I'm back again with my last video using Simon's card kit for January. I had ever intention of posting this video yesterday, but it turns out that my husband and I both had the day off. That never happens! We snuggled in bed and watched a movie and then took my younger brother out to dinner and did some shopping. It was a fun day with no "work" whatsoever! I have a quick moment to bring you this video before I head off to work for the weekend, so I thought I would! 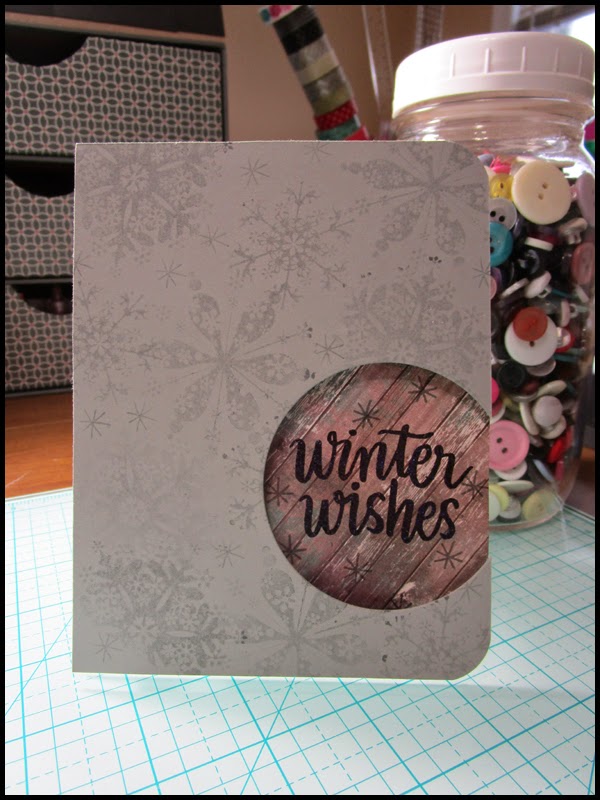 This card was really quick, but I love the way it turned out! I started with a piece of the light gray cardstock from the kit (I think it was SSS Fog cardstock - but that may be wrong!) and I wanted to add some light gray snowflakes. The only gray ink I have is from Studio Calico and it's called Clean Slate. It's a very dark gray ink, so I knew I'd have to stamp off on a piece of scrap cardstock before stamping on my panel. I used the "Snowflakes-a-Plenty" set from Inkadinkado and used the two biggest snowflakes and one of the medium snowflakes. After I was happy with those, I used one of the little snowflakes (almost looks like an asteric) from the stamp set included in the kit and filled in any empty spaces.

I used my Big Shot and my circle dies to cut out two circles. One from the wood panel paper just big enough to frame my sentiment and one slightly smaller circle from the gray paper. I made sure that my die hung off the edge of my cardstock a bit. 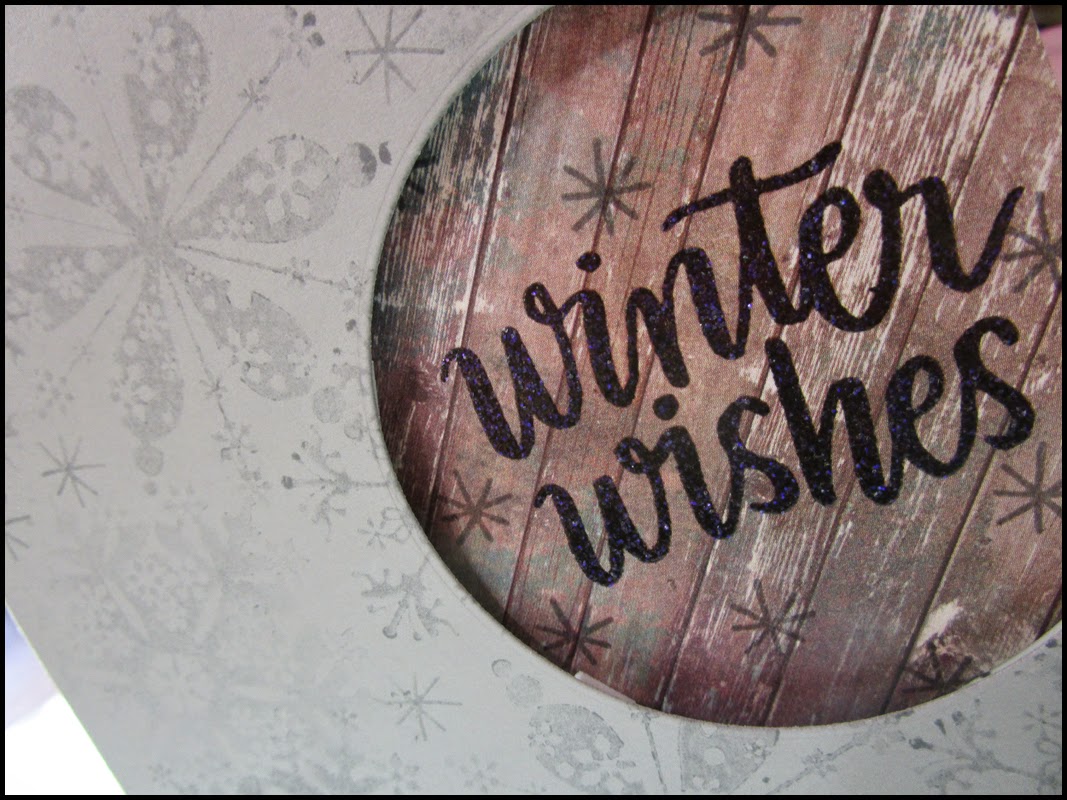 I stamped my sentiment in Versafine Onyx Black ink and embossed with Recollections Sparkle Glitz embossing powder. I thought that the winter sentiment needed a bit more winter! So I used the same mini snowflake image from the stamp set and added more snowflakes. This time I wanted them to be darker, so I didn't stamp off first.

I added adhesive to the back of the circle and just a tiny amount to the back of my gray panel so that the circle would stick to the paper. Then I lined everything up over my A2 Neenah card and adhered the circle. I carefully peeled back the gray cardstock and decided to use my 1/2 inch rounder on my Corner Chomper to chomp both right side corners of the card. I used foam squares to pop up my piece and added it to the card and trimmed off the overhanging circle.

That's it! I hope you loved this card kit as much as I did! I received my Studio Calico kit in the mail, but honestly I've been disappointed in them lately and just not inspired to use them. So I may skip over it this time. I'm thinking of doing a Valentine card series! It would be my first card series, so I'm really excited about it! What do you think? Leave me a comment and let me know if it's something you'd like to see!

Posted by Lynnea Hollendonner at 9:54 AM