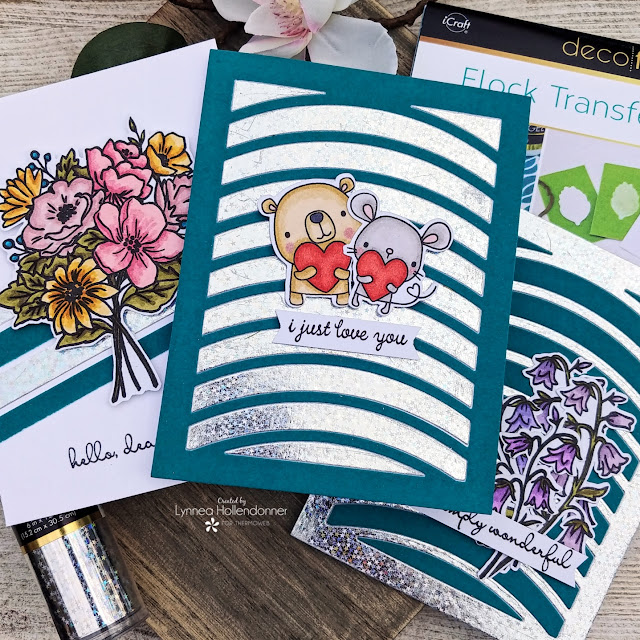 I love using cover panel dies because I can often puzzle the die cut pieces back together to create more than one card. And in this case I was even able to squeeze out a third card! 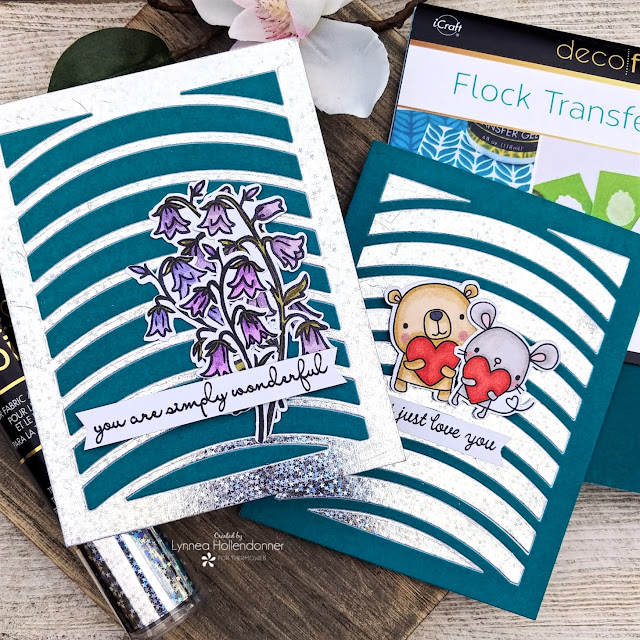 The On the Curve Cover Panel die from Reverse Confetti is the perfect die for creating two cards at once. I started by covering two sheets of cardstock with iCraft 6x6 Adhesive Sheets. I used pieces of cardstock that were slightly larger than the A2 sized cover panel die so that I wouldn't have to worry about lining it up exactly - and in the end I'm glad I did because that's how I got the pieces for my bonus card! I covered one piece of adhesive covered cardstock with a piece of Teal Waters Deco Foil Flock. I peeled away the release paper from the adhesive and added the Deco Foil Flock pretty side down into the adhesive. Then I ran the cardstock through my die cutting machine to use the pressure to completely transfer the Deco Foil Flock to the cardstock. When I removed the flock from the cardstock I had a piece of cardstock covered in the fuzzy Teal Waters Flock Transfer Sheet. Then I die cut the flocked piece with the Reverse Confetti On the Curve Cover Panel die. 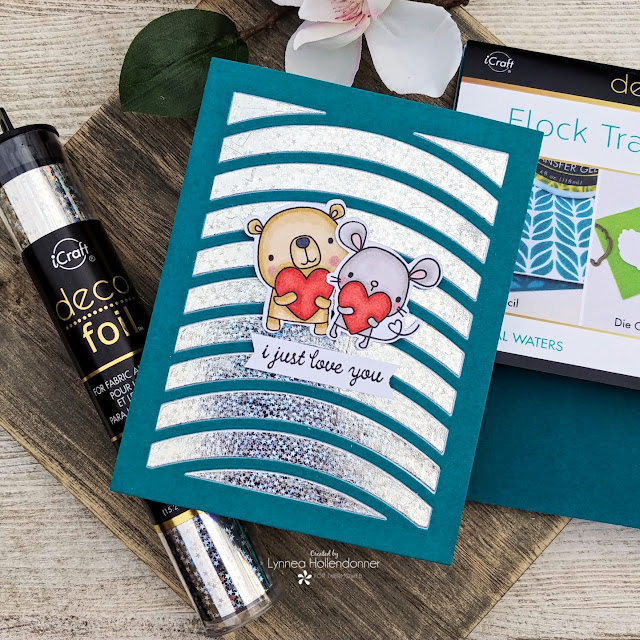 I repeated the process on the second piece of cardstock with the Silver Stars Deco Foil Transfer Sheets. I removed the backing from the adhesive and covered it with the Silver Stars Deco Foil - but with foil you want to add it to the adhesive pretty side up. I normally adhere foil into my adhesive by rubbing it with my fingers and peeling it away slowly, but I always have tiny areas that don't transfer completely. I'm afraid of putting it through my die cutting machine for fear that the scratches from my cutting plates will transfer into the foil - but I have a trick for you! I folded a piece of typing paper in half and used it as a carrier sheet to put my foiled cardstock through my die cutting machine to press it into the adhesive. It worked PERFECTLY! And I didn't have a single bit of foil left on the release paper! Hooray! I also die cut the Silver Star Deco Foil piece with the On the Curve Cover Panel die. 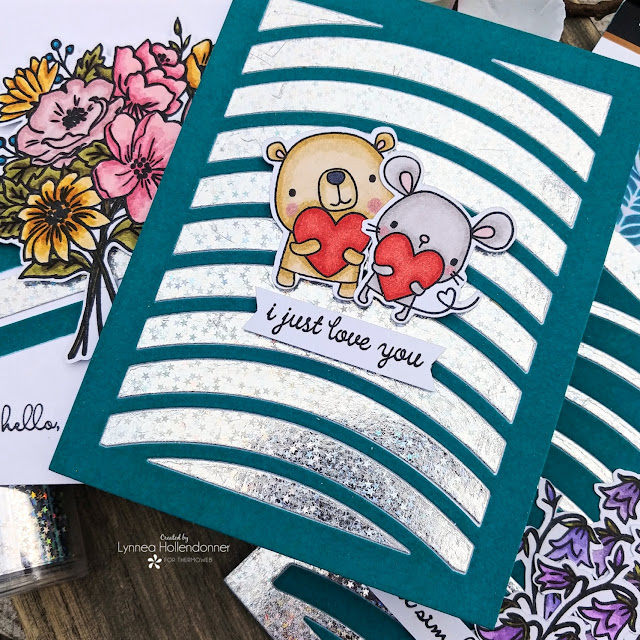 You could totally skip this next step if you wanted - but it made my life a lot easier! I used the same piece of computer paper that I used as my carrier sheet and cut it in half and added a piece of iCraft 6x6 Double Sided Adhesive to each piece and used it as a backing piece to puzzle piece my die cuts together. I added the Silver Stars Deco Foil frame to one of the adhesive covered sheets and the Teal Waters Deco Foil Flock frame to the other. Then I puzzle pieced in the opposite center pieces to each frame. I didn't have to fuss with adhesive since I already had a piece of paper fully covered in the double sided adhesive behind my die cuts. I just love the mix of textures! 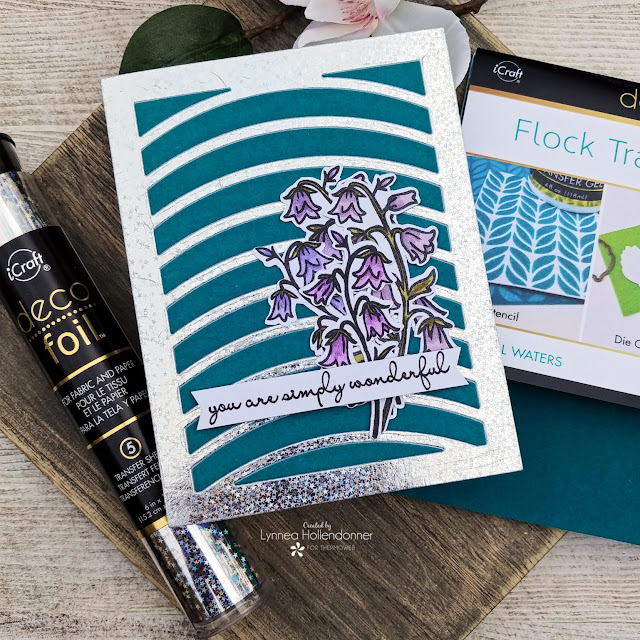 I colored a bunch of images from some new stamp sets from Reverse Confetti. I used The Best Days, Huggable, and Beautiful Memories. I used alcohol markers to color each image and then I cut them out and adhered them to my cards with iCraft Ultra Bond Liquid Adhesive. If you've watched my videos then you know this is my absolute favorite liquid adhesive! And make sure you watch my video to see a quick tip on adding multiple images with Purple Tape! It's a life saver for me! 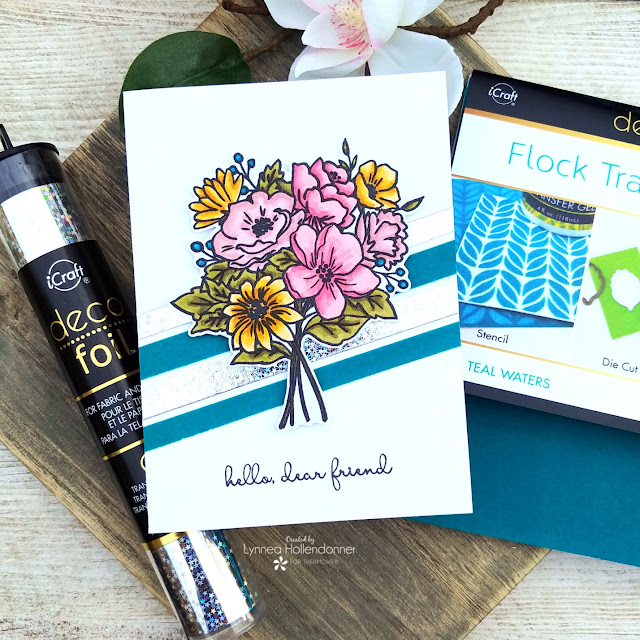 Remember that I mentioned I die cut the On The Curve Cover Panel die from panels larger than the size of the die? I had strips of cardstock covered in the Silver Stars Deco Foil and Teal Waters Deco Foil Flock left over. I just glued them onto a card with iCraft Ultra Bond Liquid Adhesive and added a bouquet and sentiment from The Best Days stamp set from Reverse Confetti. And just like that I have three cards from one technique!
Posted by Lynnea Hollendonner at 4:46 PM