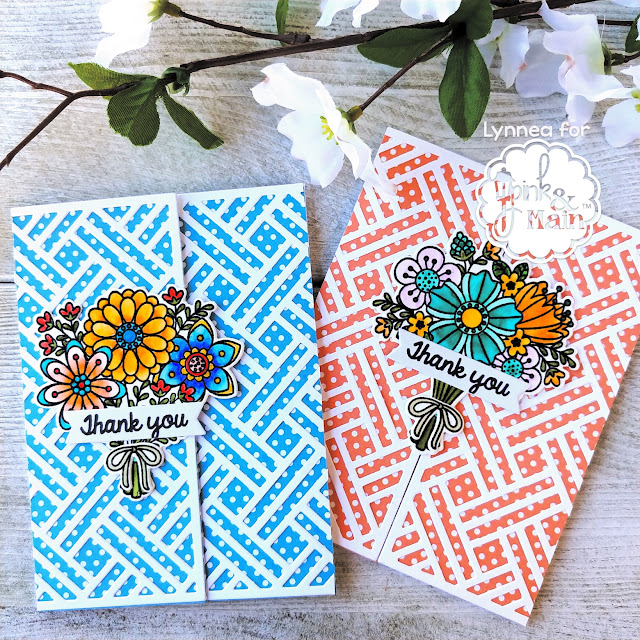 Hi! I have a duo of cards to share with you using some awesome products from Pink & Main! I love the February release! It's full of so many stamps and dies that are perfect for spring! I saw the Sweet Bouquets stamp set and I wanted to make sure those large bouquets sat at the forefront of my card - so I kept everything else fairly simple! Get ready! This post is full of a bunch of photos! Here we go! 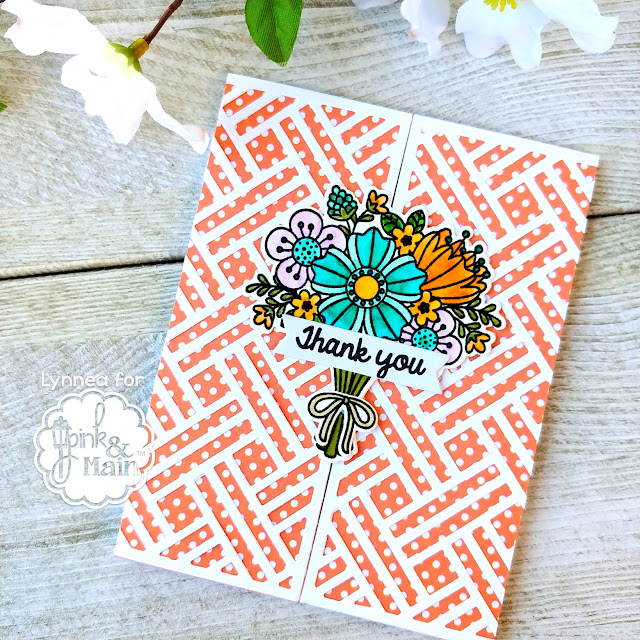 I started with a piece of cardstock that is 5 1/2 inches tall and 8 1/2 inches long - basically take a standard piece of cardstock and cut it in half like you were going to make a top folding landscape card. Instead of scoring down the middle I scored at 2 1/8 inches from each end so that when I folded the sides of the card they both met in the middle. 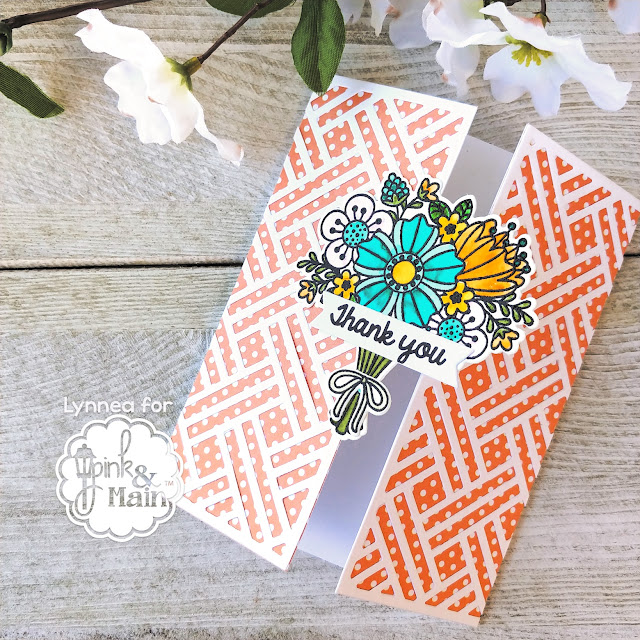 For my first card I trimmed down a piece of peachy orange polka dotted patterned paper from the Sunrise paper pack so that I could add a piece to each flap of my gatefold card. I wanted there to be just a little extra "something" so I took a white piece of cardstock and die cut it using the Basket Cover Die. The last time I made a gatefold card I die cut two panels and carefully found the center part and folded it in half and wrapped it around each half of the card. Not this time! I found an easier way! I just die cut one panel and cut it right in half and glued each half to one side of my card. It was so much quicker! 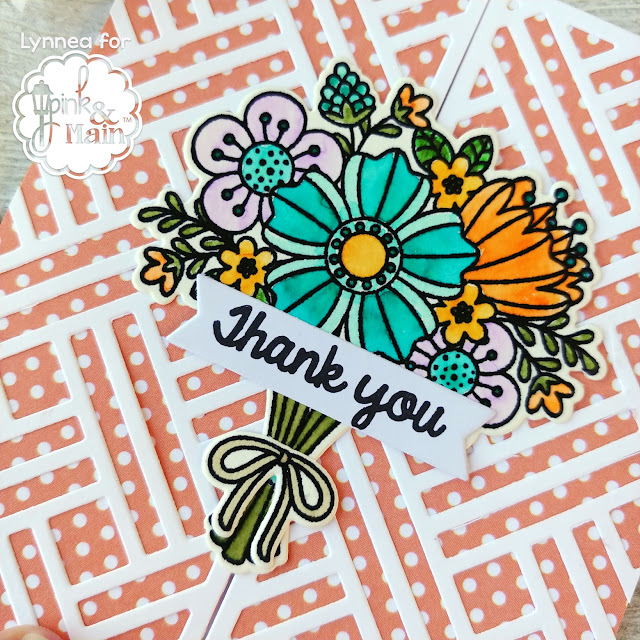 I stamped out the bouquet of flowers from the Sweet Bouquets stamp set and colored it with my watercolor markers. I used the coordinating dies to cut out the banquet and stamped a sentiment onto white cardstock and used one of the banner dies to cut it. I cannot describe how excited I was that this die set comes with banner dies! I've used them so many times all ready! I adhered the bouquet to the center of the card being sure to only add adhesive to the left side of the image so that my card could still open. 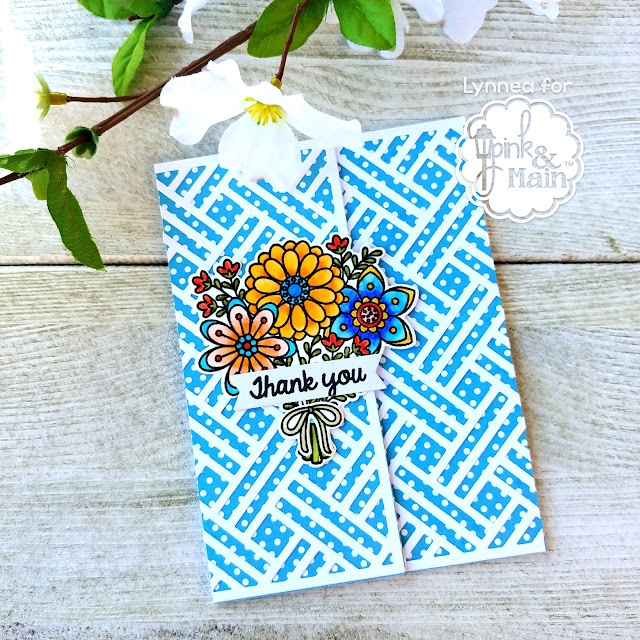 Once I made one card I was on a roll and decided to make another! This one has a mistake though! But no matter - I rarely throw a card in the garbage! I made an error while scoring my card - I cut a panel the same as before and I meant to score at 2 1/8 inches from each end, but I scored too far in on the left side, so the two sides overlapped and it's not a true gatefold card. 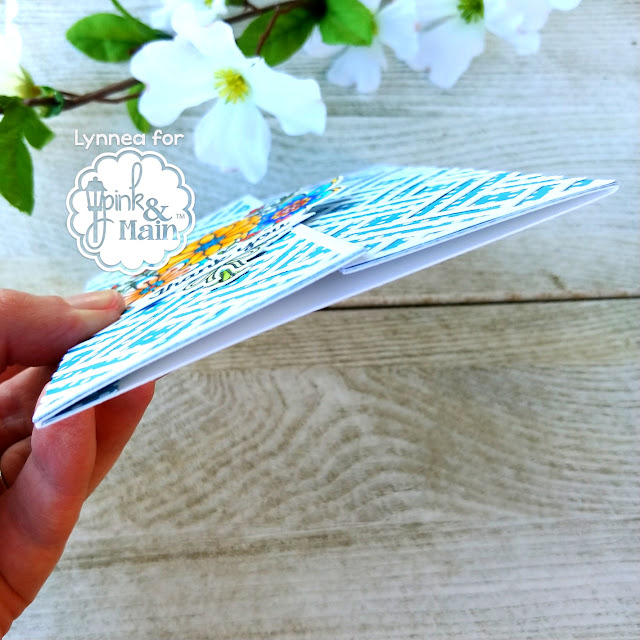 You can better tell what I mean from this angle. The two sides overlap just slightly. I could have trimmed a hair off of the left side, but I decided to run with the wonky fold and make it my own! 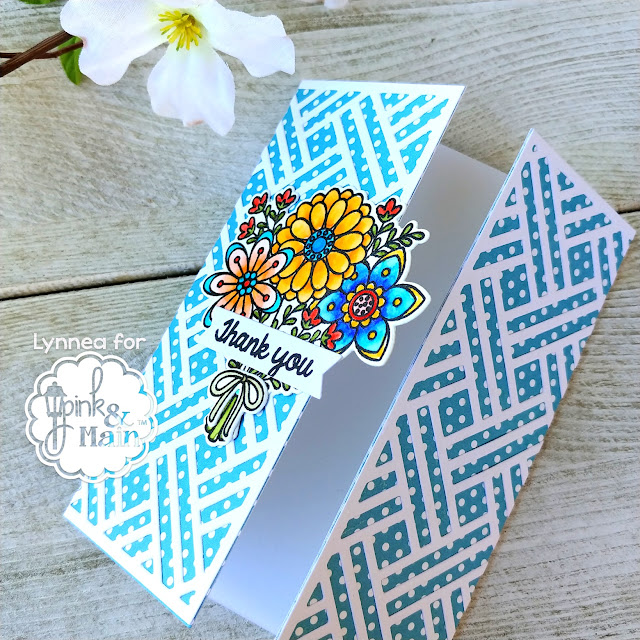 I created this card almost exactly as the first - just with some adjustments for the incorrect scoring. I used a piece of blue polka dotted paper from the Sunset Paper Pad and rather than measuring down to the tiniest of measurements I just adhered the patterned paper to one flap and used scissors to trim off the excess and repeated the process with the second flap. I again cut a piece of white cardstock using the Basket Cover Die and adhered it to one side, trimmed the excess, and adhered the remaining portion to the other side. 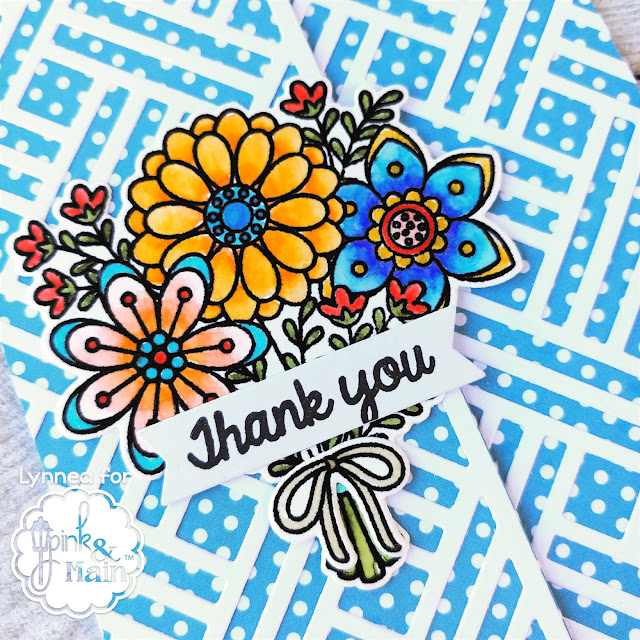 I hope these cards inspire you! Thanks for reading!

Posted by Lynnea Hollendonner at 10:00 AM